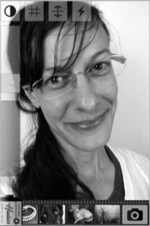 I follow A Lesser Photographer and an iPhone app mentioned in his latest newsletter caught my interest. If you like shooting black & white you might want to take a look at this app; I would if I had an iPhone.

There’s a reason the best photographers embrace black and white. In the words of one of the greatest living landscape photographers, Clyde Butcher:

“Color is duplication, black and white is interpretation.”

Black and white reveals the most important aspects of an image for the discerning photographer: pattern, texture and luminosity. It’s just the biology of the human eye to be distracted from these elements with the addition of color. Black and white photography is not about purism or minimalism, it’s about mastery of a craft.

Leica recently took advantage of the resurgence in serious black and white photography by introducing their M-Monochrom digital camera. I won’t even get into the sense of buying an $8000 camera that might be obsolete in five years, when for $2000 you can have a Leica film camera that will last a lifetime and still be worth $2000 when you die, but I digress.